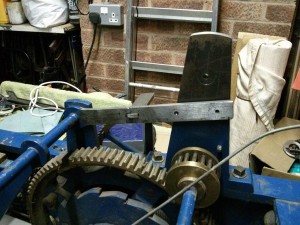 Another job started while we think about the escapement (and of course Christmas is distracting). The strike stopping lever had been kinked to pass on the outside of the arbour support post. This has been straightened back out.

It had also had an extra chunk of metal welded to the top to take part of the electrical switching mechanism for the motor. This has been removed. The original projection had been ground off just below this position, leaving the metal a little scruffy beneath the paint. In the picture you can see a temporary new projection loosely in place. The rest of this (the downward part to be pushed by the pins) can’t be finished until we get a bit more of the striking mechanism replaced.

A weight had also been added to the end, attached through one of the existing holes for the catch plate. Easily removed.

The lever seems to have been shortened a bit too, it should (presumably) have a nicely rounded end like the one on the chiming mechanism. Currently the end is straight, but not quite at 90 degrees – I’m sure this can’t be original. This can be repaired last, when we’ll know just how much metal to add to get the balance perfect.

This is now much closer to original, although still not finished. Compare with how it looked, from the opposite side, when purchased (also note the arbour support that has now been rebuilt): 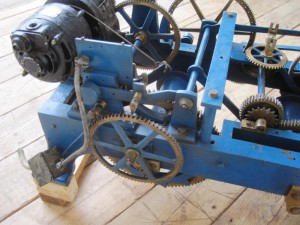