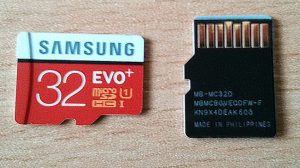 My recent post on how to change the CID on a Samsung Evo Plus SD card has generated some interest, but also a number of people who are having problems with it. I thought it was worth posting an update with some extra information. First off, I suspect some people who are struggling have fake cards – there are a lot out there and some of them look pretty convincing. Others have suggested different hardware / firmware revisions might be an issue – quite possible but I have no way of knowing (all my Evo Plus cards work, so I can’t can’t compare against ones that don’t). I can see no reason why different phones etc. would give different results – as long as it’s a proper SD controller (not a USB mass storage adapter) then sending the command should work just fine.

Fake cards
These are very common and if you google for fake Samsung cards you’ll find lots of info on how to spot them. A few tip I’ve picked up along the way:

My cards / System
Samsung Evo Plus 32gb. UPC: 8806086928410. Model: MB-MC32D. Model code: MB-MC32D/CN. Purchased from this listing on AliExpress. I am not affiliated with the seller and get no referral commission from this link. I also cannot guarantee that you’ll get working or even genuine cards, but I have purchased on two occasions from this seller and the cards have been genuine and worked with evoplus_cid.

I have used evoplus_cid on a Samsung Galaxy Tab 2 (10 inch, wifi model, p5110). The tablet is running CyanogenMod 13 unofficial from here.

evoplus_cid
I’ve made a couple of updates to evoplus_cid. If you supply a full 32 digit CID (and don’t apply a serial number modifier) it will be written as is without recalculation of the checksum. This was requested by a user for cards that apparently always had a checksum of 00. Although, I’ve got a laptop that always displays 00 for the checksum when showing the CID, so I wonder now if his cards really did need that! I’ve fixed a bug when compiling on 64bit Linux that could prevent the CID being written. I’ve also fixed a bug causing the displayed CID to include some extra ‘FF’s.