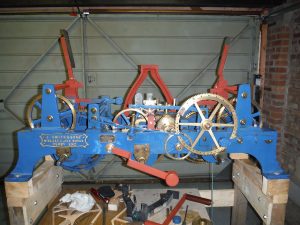 I thought a progress report was in order for the turret clock we (my father and I) are restoring, after I realised we started this project way back in November 2014! As a refresher the clock is a 1922 cast iron flat bed turret clock made by John Smith & Sons of Derby. It was purchased in a poor state of repair, having been butchered in the 1950s to make it electric drive and later having much of the electrics stripped back off. The original parts removed during the motorisation would have been recycled at the time so were no longer available to be replaced, later removal of the motors (etc.) just left the clock in a non-working state.

Since November 2014 a lot has been achieved. We now have fully working striking and chiming trains and the going train finally feels like it’s well on its way to completion. I’ve tried to list out everything that has been made or sorted so far. Pictures of the current state of the clock are below, along with some pictures showing details of recent additions to the going train. The red parts are all new, as are quite a lot of brass parts and several steel arbours which haven’t been painted. Eventually the clock will be properly painted but in the mean time the red primer makes a nice contrast between the new and original parts. There are a few temporary supports and bolts in the pictures, but this is still very much work-in-progress.