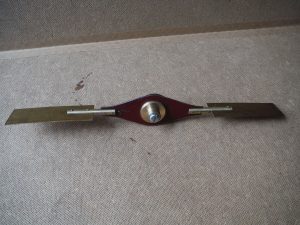 The double three-legged gravity escapement uses a fly to dissipate some of the excess energy in the system. When the escapement unlocks the legs of the escapement move 60 degrees before coming to a sudden stop again. The fly helps to reduce the acceleration of the escape wheel and, like the fly on the striking train, needs to be able to continue to move a little when the arbour stops suddenly. Unlike the bigger fly this one doesn’t use a ratchet, instead it uses a friction device. We need enough friction that it gets turned with the arbour starts to move, but when the arbour stops it should be able to slip and come to a natural stop. The fly was made from a drawing supplied by Smith of Derby when my Father visited them. It’s no coincidence that it looks just like the one on the St. Alkmund’s church clock.

The pictures below show the completed fly, with a bolt through the middle where the arbour would normally be – which is why it looks a little wonky in some of the pictures.