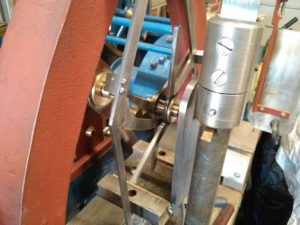 The escapement works – it’s alive! The escapement has been installed and the lifting arms trimmed to the correct length. According to the books we’ve read the pendulum should swing 3 degrees (each way), but nowhere does it say what positions the arms should be lifted to before the pendulum reaches them and how much further they should be moved by the pendulum. The more they are lifted by the pendulum the more energy the pendulum will lose on the upswing and so the less of a push, relatively, will be given to the pendulum on the downswing. This was a simple bit of trial and error, positioning our temporary pendulum manually (the arch pattern was helpful for holding the pendulum, see the pictures below) and seeing where the arm rests on the block and how much the block moves with the rest of the swing. The result we were happy with was lifting the arms to a position reached with the pendulum at 2.5 degrees. This let the arm of the escapement sit about about a third of the way on to the block. When the pendulum pushes the arm the rest of the way to 3 degrees it moves the block enough to unlock the escape wheel with a reasonable looking clearance.

I have uploaded two videos to YouTube showing the escapement in action. In the first video the clock would only run for 5-10 minutes at a time. In the second, after all the new parts had bedded in a little it will run for hours. The blocks you see next to the bracket are in place of the banking pins, which haven’t been made yet. There is a extra collar on the pin at the bottom of the left arm because the arm needs a slight tweak to it’s angle. The pendulum is temporary and too short, so the clock is running faster than it should.