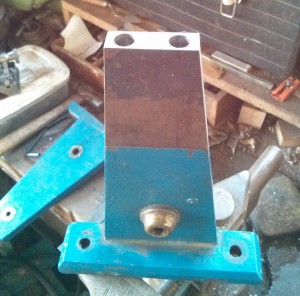 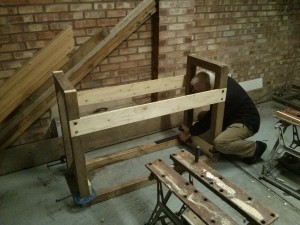 Working just above floor level wasn’t going to be very comfortable, and you need space underneath the clock to get the barrels out, so a stand was needed. This was made from wood we had on hand, all we needed to buy  to make this was a few extra coach screws. The stand needs to be pretty strong as big cast iron framed turret clocks are heavy (not sure exactly how much this one weighs, we must try and weigh it at some point) and so are the weights and the pendulum . The uprights are 3×3 inch and the the stand is rock solid. As we don’t yet know the pendulum length we made it plenty tall enough and then mounted it on the original wheeled boards I got with the clock. The result was a little too high to work on comfortably so we ended up having to shortening the uprights a little. 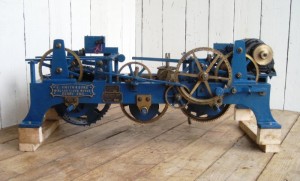