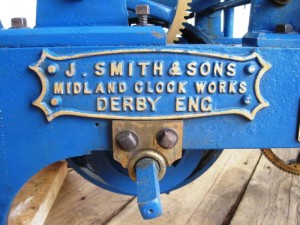 My father emailed Smith of Derby to see if they could help us identify where this clock had been installed and if they had any information about it that could help us recreate the missing parts. As we are local to Derby he was invited over to look at a similar three train clock they had in their workshop. They very kindly allowed him to take measurements and photos and one of their engineers answered his questions and supplied some printed information.

Unfortunately they weren’t able to tell us where the clock had been. It doesn’t have any kind of serial number so tracking it down based on “I was told it came from Bournemouth” was rather a long shot.

We did learn lots of useful things though, probably the most important being that the clock did not have a pin wheel escapement as we thought – it would have had a double three-legged gravity escapement.

Another thing we discovered is that they likely did the electric conversion. That was a bit of a surprise. I guess it was done in the 70s (there is a Smith plaque, dated 1974, over the hole where the maintaining power should have been) and lots of dodgy things were considered the norm back then. If you have a clock you’d like motorised be assured that’s not how they do it anymore!

I’ll mention other bits of info picked up on the visit in appropriate posts as they crop up.