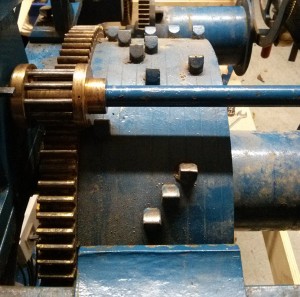 This clock has quite a large chime barrel compared to many of the turret clocks I’ve found online – it has 8 positions across the barrel meaning it uses 8 bells. But what’s the tune?

There are 4 pins on the side of the barrel (actually only 3 are intact, a little of the forth has a remains snapped off in the threaded hole which might be a pain to get out). These stop the chime when the end of the tune is reached. This suggests that the barrel rotates once per hour and plays at all 4 quarters. This might sound obvious but apparently the East Garston church clock has two copies of the tune on the barrel and only rotates once every two hours (presumably there 8 pins around the edge). The pin stops the chime when it reaches the top and the projections that move the hammer levers (I’m sure these must have a proper name) do so at the edge of the frame. So with barrel positioned with a pin uppermost there should be a gap in the projections where the hammer levers can rest between quarter hours. Our hammer levers and the bracket for them is missing – something else to make! Our 4 pins are all spaced increasingly far apart, suggesting the tune gets longer each quarter hour and so making it easy to see which section is which quarter.

Now starting from the gap before the shortest quarter we simply wrote the position of each projection (1-8, left to right as viewed in the picture) and the length of the gap after it in beats. The most common gap was 3/4 of an inch, so we defined this as one beat. You can’t tell how long the last note is because nothing follows it.

Next job was to consult a list of clock chimes. We used the ‘Watch & Clock Encyclopedia’ by Donald De Carle, 1959. There are a surprising number of chimes but they are listed by number of bells and if you count how many notes are in each quarter it’s pretty easy to work out what you’ve got (assuming it’s in the book of course). We mapped the notes to the barrel projection positions and the whole thing fits perfectly, as did the timings. Ours was actually the first 8 bell chime listed – Guildford chimes.

According to the book Guildford chimes were composed in 1843 by George Wilkins for Holy Trinity Church, Guildford.