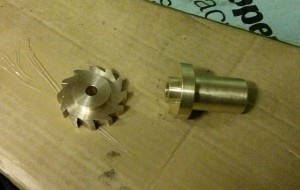 The fly is a kind of air brake that controls the speed at which the connected arbour can rotate. This in turn controls the speed of chiming or striking. Obviously the timing here isn’t nearly as critical as the going train. The fly goes on the same arbour as the lantern pinions made last week. Unfortunately this whole section of the train had been removed when the clock was converted to electric drive.

Our new arbour is made of medium carbon steel and will eventually be hardened at the ends where is passes through the bushes. On one end of the arbour we have the new lantern pinion. On the other end the arbour extends out through the new bush and through a loose bush to which the fly will be attached. The arbour is then squared off to take a ratchet wheel. This wheel turns with the arbour and forces the fly to turn using the spring loaded pawls attached to the fly.

The pictures show the new arbour with lantern pinion (it’s not yet attached to the arbour so the pins haven’t been trimmed and the end hasn’t been closed), the new rotating bush and ratchet wheel in position.