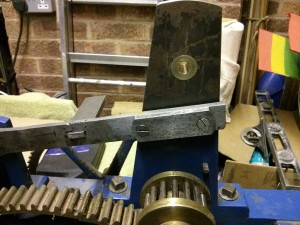 We’ve got a little bit more work done on the strike controlling mechanism (I previously called it the strike stopping mechanism, but of course it’s just as involved with starting the strike as it is with stopping it). The two “catch plates” (I don’t know if there is a proper horological term for these) had been removed. New ones have been made, but are not yet complete. To complete them they need two rectangular projections that interact with a third projection on a rotating arm attached to the fly arbour. We have also made the first of these rotating arms (minus it’s projection).

My father has seen this in action on his visit to Smith’s, and we have videos, but we still need to do some work on figuring out exactly how it works. An explanation of our current understanding follows…

Starting position before the clock begins to strike:

This explanation will probably be a lot easier to follow once we’ve completed it and have more pictures, or better yet a video. In the mean time these videos might help: a 1912 Smith clock in the US & the 1910 Smith clock at Trinity College, Cambridge.