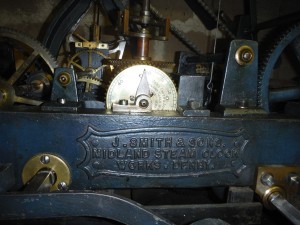 Unfortunately here has been little progress on our clock over the summer as we have been stuck on the escapement. However, we have finally managed to track down a suitable clock for us to model our missing escapement on. The clock is of course a J Smith & Sons, Derby and is of pretty much the same size and design as our own. In the end we didn’t have to go far to find it either, about 5 miles from my house is St Alkmund’s Church, Duffield. Where, coincidentally (or probably not), I will be getting married next year. I must thank Mike Banks (previous clock keeper), Luke Heaton (tower captain) & James Buchanan (assistant minister) for making this visit possible.

The clock is slightly older than ours at 1897 (vs. 1922), and there are a number of differences, but many of the important details are the same.

Now we have measurements for lots of details we didn’t before, as well as having actually seen one up close (which makes a big difference). We are now in the process of drawing up the missing parts and planning the next steps of our restoration.

Here are some pictures of various parts of the clock we wanted a closer look at.