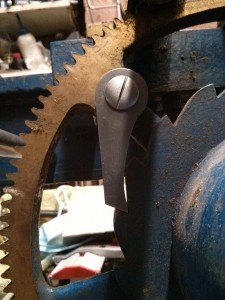 It’s been pretty cold again here so progress had been limited for the last couple of weeks, but another small job has been completed. All three of the barrel ratchet pawls were missing from the clock, along with their springs, and the pin to attach the pawl on the going train (the pins on the other trains did more than just hold the pawl so had been left on). When the clock was directly motor driven theses were no longer needed.

Replacement parts had to be made. The springs are riveted to a small block that bolts to two threaded holes on the wheel (3BA thread), as you can see in the pictures.

When purchased the barrel and the wheel were stuck together, I was worried they might have done something nasty to join them. However,  with dismantling and cleaning, they have freed off and now work nicely as they should.