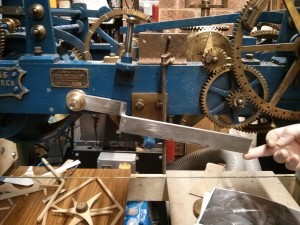 The maintaining power is a device for keeping the clock going while you wind it (and winding a turret clock can take a while). The type on this clock involves a weighted lever which must be lifted to allow the winding handle to be attached. Lifting the lever engages a pawl with the great wheel to apply force to the going train. The lever slowly returns to its resting position as the clock continues, by which time the winding should be finished.

The hole at the front of the clock for the maintaining power arbour had been covered by a John Smith & Sons, Derby plaque, which was our only clue to the fact that Smith’s had done the conversion. Smith’s confirmed this was how it used to be done when my Father visited them.

You can see in the pictures some liquid weld filling three of the bolt holes where the plaque was removed (the head sheared off the fourth). They look a bit ugly now but once they’re smoothed down and the clock is repainted you’ll never know there’d been a plaque there.

A new blush was made for the front and there isn’t one at the back (the arbour goes straight into a hole in the frame). There isn’t a great deal of movement here, but without a removable bush at at least one end there would be no way to get the arbour in and out.

Then a cranked lever is attached to the squared off arbour and a fancy brass nut holds it all in place.

Next steps are the pawl, the weight on the end of the lever and a stop to prevent the lever going down too far.