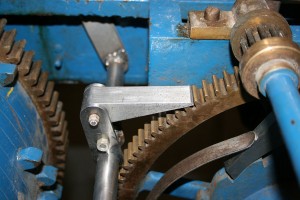 The maintaining power is now completely finished. The lever has a weight. The pawl to advance the great wheel has been made and attached (welded to the arbour). There is even a stop to prevent the lever being lifted too high and to prevent it dropping below the level of the winding peg.

From the fully charged position (lever all the way up) there is approximately four minutes to wind the going train. It actually takes about six minutes to return to resting position but because it passes in front of the winding peg it would rest on the winding handle if it were still attached beyond four minutes. Passing in front of the winding peg is deliberate, it means you have to charge it before you are able to wind the going train. You don’t want a turret clock slowing down on you else you employees might be late for work!

As we currently have no weights to wind up we have no idea how long winding will take. Luckily if it takes more than the time allowed the maintaining power can be recharged mid-wind as many times as needed.

The pictures show the pawl in three positions, from fully charged to resting gently on the teeth of the great wheel as it rotates beneath it (which it always does when not charged).